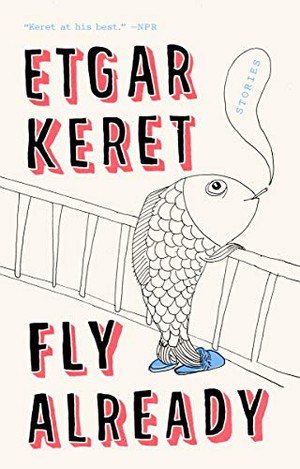 “An antic, anarchic collection that pitches yearning, bumbling, bamboozled characters into situations where salient life lessons are difficult to come by.”

“Keret continues his streak of writing short stories that are mordantly funny and bizarre in his latest collection . . . Threaded through his sense of humor, you feel a little less lonely, a little more light.”

“A perfectly-toned example of a piece of Keret short fiction . . . As a reader, you’re so immersed in Keretworld, that the twist in the tale is particularly more outrageous and unexpected than usual. Fantastical, heart-breaking, laughter-inducing, fabulist, and sometimes just downright wacky, Keret’s writing is palpably imbued with a distinct element of intimacy, as though the author has just invited you into his local café or pub to chat about the state of the world — of our world — over your drink of choice. Keret’s stories shimmer with an energizing, evocative amalgam of comedy, both dark and light, and a high-level tolerance for the absurd. And always — always — even when it feels as though he’s finessing his pages with a giant shrug about the ridiculous vagaries of the universe, inherent in Keret’s writing is a resolute insistence on adhering to life, as well as to the ineluctable joys of wordplay . . . Keret’s thought-provoking tales of the unexpected delightfully confound expectations: There’s an element of violence that lies beneath them, but also an element of hope, a gentle reminder of the value of human connection . . . If you’re already familiar with Keret’s work, this is a welcome addition to his canon; if you haven’t read him yet, this collection is a terrific place to start.”

“When you read an Etgar Keret story, it’s hard not to go straight to ‘genius.’ Who else could write a complete narrative in two pages about a family with a goldfish . . . The stories in this collection are wide-ranging, and many have that fantastical, highly imaginative Keret element. There is dark humor, wry humor, really-fucking-funny humor. There’s depth and sadness. And mostly there’s life: people falling into and out of relationships with themselves and others.”

“Sly and subversive collection . . . full of modern-day fables about family, angels, UFOs, cloning and other weirdness.”

“An Israeli writer is making short stories fun again. Etgar Keret doesn’t avoid a punch line. The fiction writer and This American Life regular tackles Big Important Subjects in his work—death, family, war, etc.—but he does so in a way that’s not, well, a bummer . . . By embracing the comic and the absurd, Keret achieves something rare among modern short-story writers: He’s actually worth reading.”

“If Kafka was Israeli and wrote about talking goldfish. Etgar Keret, the writer of absurd, sad, funny and very short stories, grows up . . . These sardonic and very short fables are the next installment in the series of strange scenarios cooked up in Keret’s brain . . . They are absurd stories your stoned friend might unfold while giggling, but the best of them land at some insight into the human condition, all economy and charm. This new collection, though, plumbs darker depths . . . The novelist Jonathan Safran Foer . . . described the form of the stories ‘not as any kind of creative choice but as an act of necessity . . . there is no padding, no gilding or extravagance, only pure, weird, resonant storytelling — the kind that persists in our imaginations precisely because of how much room it leaves the reader to participate.’”

“Quirky, funny, touching, immensely readable, pure pleasure—and though most are very short, they are tightly scripted and satisfyingly complete. Originally written in Hebrew, the pieces in this fine collection lose nothing in translation; the wit and humanity of each tale survive intact. Ideal reading for short bursts of time or short attention spans.”

“A source of guidance for absurd times. Fans of Keret know to expect brevity, cleverness and an especially Israeli gallows humor from his writing. But Fly Already also carries a striking tenderness.”

— The Jewish News of Northern California

“It’s difficult to characterize the work of a writer as prodigiously talented as Keret . . . for whom nothing seems off limits . . . This smart, strange, completely enthralling collection includes nearly two dozen short stories that span a wide range of topics and tones . . . If there’s a through line, it’s narrators who get more than they bargained for . . . Readers new to Keret will be dazzled.”

“Keret’s new short story collection offers all the virtues readers have come to expect from the oft-New Yorker-published Keret: intelligence, compassion, frustration with the limits of human communication, and a playfulness that stays on the right side of whimsy . . . Keret’s deep interest in human connection feels important in our fractured times.”

— The Millions, “The Great Second Half 2019 Book Preview”

“Keret balances gravitas and drollery in this collection of 23 pieces. Stories often begin with declarative sentences . . . that presume an intimacy with the reader and immediately engage . . . Each capture a moment of emotional complexity . . . The endlessly inventive Keret finds the truth underlying even the simplest human interactions.”

“Like Lydia Davis, Etgar Keret has written stories of such singular diminutive style it took the culture a few years to realize: this is not a novelty act. This is the work of a genius, and he can pack more comedy and heartache into a single tale than just about any writer alive. A new book is cause for celebration.”

“These stories—swervy, thrillingly funny, honest, and almost shockingly alert—disarm a reader in abundant ways. Keret will look at any situation and any type of character with an open eye to all defenses, and slowly (or really quickly) peel these away.”

“The Israeli short story writer once again displays his knack for comic, absurd, occasionally dystopian observations . . . Keret, who earlier in his career worked more often in flash-fiction mode, benefits from a wider canvas here, particularly in Saunders-esque speculative stories . . . Every piece demonstrates Keret's admirable effort to play with structure and gleefully refuse to be polite about family, faith, and country. An irreverent storyteller who has yet to run out of social norms to skewer.”

“Reading Fly Already is like settling down for a ride in a luxurious car with a world-class driver who has an extremely crazy worldview that doesn’t interfere with his amazing driving. Is there any better way to see the world?”

“I am in awe of Keret's ability to simultaneously make me laugh while crying, explore the joy and horror of every day life with precision, brevity and great psychological depth. His recognition of and engagement with the absurd is profound and he never loses his humanity, his heart along the way.”

If Kafka Were Israeli and Wrote About Talking Goldfish — The New York Times.